This is a fact.  Nothing more, nothing less. Just a plain and simple fact.


My real name is not Cherry Neko and unfortunately I cannot save the world.  Truthfully, it's probably best to leave that to the likes of Batman, I'm far too clumsy.  Although, I suppose if he ever needed a hand when Boy Wonder's off frolicking around in his yellow underwear, Bat's could give me a call.  If this was to happen, there would be one important piece of information he would need to know.  I DO NOT WEAR CAPES! That would be a deal-breaker, and besides if I was a hero of sorts, I'd be the bad-ass kind...with a shot-gun, sword and an awesome pair of boots.


As for my name?  Well nearly everyone I know calls me Clefairy, of course that's not my real name either.  It's actually Claire, but only my mum and dad call me that.  So I thought if I've managed to practically changed my name in real-life, its technically not a nick-name any more.  That makes me sad.  Then the idea came to me to change it in the cyber world, and so using some other lesser known of my nicknames Cherry Neko was born in a cloud of rock and glitter!  Weird I know, but like I said in the first sentence, I'm odd. 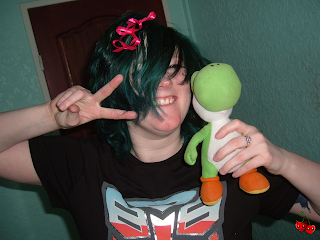 I have lived in Liverpool, England my whole life with my mum, dad and sister Vicky.  Yes I am old enough to move out, but alas I do not have the pennies.  One day though, one day, I will own the most awesome home ever and a random picture of Nathan Fillion will greet all that enter.  Who will be my partner in crime at the new hq, none other than my boyfriend Danny.  It shall be a magnificent home, and a shrine to geekiness alike.


As for my likes and dislikes, well you'd probably have to own a copy of The Encyclopaedia of My "Healthy" Obsessions.  Trust me, it's a good read.  It's just a really long read too.  But if you were to ever take time out to read it, you'd find out that I'm a Tim Burton fan, that I love cupcakes, Supernatural is in constant battle with Buffy the Vampire Slayer to become my all time favourite show (they both can't seem to beat each other), I love naming everything, Portal is my favourite computer game, Interview with the Vampire was my favourite book when I was a smaller version of myself but now I'm all grown up my favourite is Skulduggery Pleasant, I am also a Wrestling fan, I love tattoos and I love being tattooed, oddly enough I like to collect cups (I currently drink tea mostly from my beloved Ramones mug), I love Japan and hope to go one day, in the meantime I read manga and watch anime in the hope it will somehow bring me closer (very strange I know), I own roughly 1000 DVD's which obviously means I watch a lot of films and TV shows.  This is just a short list of my likes, but hopefully in your pretty little head this means your forming some kind of picture.


Hobbies are another thing I tend to have a lot of.  That's not a bad thing though.  It keeps me well entertained, which means I'm hardly ever bored.  Being bored is my number one enemy, especially seen as I don't work at the minute.  Unfortunately, I suffer from severe ulcerative colitis and as result have had some surgery that sadly my body has not taken to well too.  It doesn't mean its the end of the world though, I still have my friends, I still have family and I still have someone who loves me.  So in a nutshell, I'm very lucky.  Now, where was I?  Ah, yes, hobbies.  I have always loved to write and draw.  Recently I have started to dabble in sewing, cooking and jewellery making.


Maybe one day I'll have more to write about that, but for now I'm still learning so I can't say what my favourite aspects are, only that I enjoy them.  That's enough to make me happy.


So that's a little bit about me.  Like I said there's a lot more to know about me, but what's the fun of giving it all away now?  If you'd like to know more feel free to ask, who knows maybe I'll know the answer.  For now that's all your getting, I have food to eat and an impatient boyfriend waiting to watch some films with.  It's a good life.

P.S.  Danny has requested that it be known he's not impatient.  Which he's not really, but still, it's fun to wind up.