I do plan on writing a proper blog post about all the awesome things that I've been doing this last week (okay, not many awesome things, but I do promise a proper post soon).  Instead I just thought I'd post something that made me giggle uncontrollably last night and hopefully spread smiles across the world.

He is our new saviour, the Dark Pug! 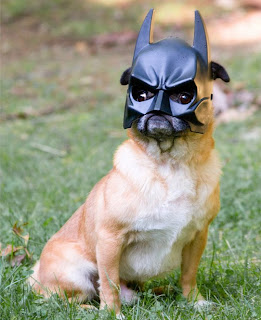 He will be the hero we need him to be.

I'm hoping that you guys out there are all smiling, and if not, then think of something that does make you smile right...now!

See, made ya smile.

I'm sorry once again about my inactivity, truthfully I've not been having the best time at the minute and last week  I recieved some bad news.  So I wasn't the happiest bunny for a few days.  But not to worry Cherry Neko has pounced back to her feet and has decided that she's happy again.  Which has meant lots of bouncy giggle fun woohoo!!!

I'm posting today to thank Holly from Holly's Horror Land blog.  I won another award.  It's another one I shall treasure forever =) 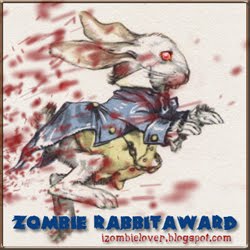 Yes, even rabbits are zombies now.  Sheesh, it there no end to this madness, what next sheep?  (Actually there's a film about that too isn't there? Hehehe)

So yay for zombie rabbits and yay to Holly!!!

1. Give the award up to 100 who you like, but give a couple the "Next Blog" slider button on top...so random blogger people can feel the love from a stranger.

2. Post those you gave the award to, so fans can see the places you like and paid it forward too.

So ladies and gentleman I give to you my 10 Zombie Rabbits!!!
1.Brighid's House
2. Justine's Halloween
3.Lariats and Lavender
4.Lovely Miss Megs
5.Two Gory Chicks
6.The Horrors of it All
7.Tales from the Batcave
8.Sherixfirefly
9.Memoirs of a Scream Queen
10.Icky Monster

A very happy un-Halloween to you!  The countdown to next year has begun, and don't tell me your not excited.

I had a brilliant Halloween this year.

This was the first year I had a pumpkin thanks to my wonderful boyfriend.  I had so much fun carving it, and a lot of fun pulling out its guts!!!  I loved my little Jack Skeleton, but sadly he's rotted now and living in the bin.  I miss you first pumpkin.  There is a photo but it's on Danny's phone so I have to wait for him to come down to get it.

First time for a few years I was able to go out and it was so much fun.  Like I said before my bestie threw a late Halloween party this year.  I dressed as a rockabilly zombie, although I'm so bloody pale you can barely tell I was pale grey.  But it was fun to put on.  The party was so much fun and I made Sian's Braain cakes, and I suggest you try them all too.  Fun to make, and even funnier to eat.  It's hilarious watching people squirm while they eat them.  I've had demand for more.  Though I think I'm going to mix it up next time and make dead brains, making the icing grey and the jam green.  Thanks for the cake idea Sian!!!  You, my dear, rock! 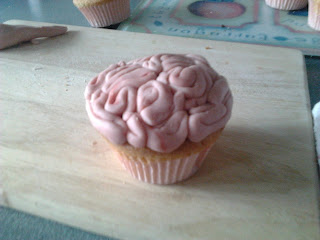 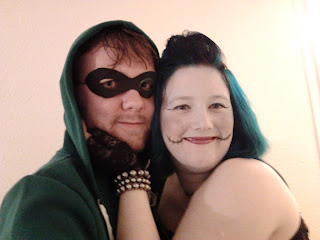 For the actual Halloween I stayed in Danny's and he told me he had some surprises for me.  I sat in bed got all snuggled up warm with a big bag of sweeties and he put some surprise films and DVD's on.   The first I as very pleased with because it was Nightmare Before Christmas, I've watched it every year for as long as I can remember on Halloween and on Christmas Eve.  It's become tradition, and he remembered so kudos to him.    Then we watched the Psych vampire special...possibly one of the funniest episodes of anything I have ever seen.  Lestat and Blackula should become a crime-fighting team.  Then I finally started the Walking Dead.  Such a brilliant episode, I'm finishing the first series tomorrow, I can't wait.  He topped it all off with something that made jump with joy, and earns him a Best Boyfriend Award.  Buffy the Vampire Slayer, the Halloween episode.  It's my favourite episode, and the fact he knew that was brilliant.  So it was a brilliant Halloween.  I hope everyone else had a really good Halloween too!!!

I won an award!

Hey everybody, come see how good I look.  Well how good my award looks.  I am sooo happy with this, it really does cheer me up on bad days when I log on and find something so nice.  So thank you Annie Walls for being so nice, and thank you for having such a fun blog to read!  Everybody should stop checking out how good I look, and should now run their tiny legs over to Annie's blog!!!

There are 2 simple rules and none of them are about Fight Club.
1.Thank the person who gave you the award and link to their blog.
2.Pass the award on to 5 blogs that have less than 200 followers.

So my wonderful blogging buddies are...