I know, I know, I'm sorry.  I make another promise to do another blog entry and fail to provide.  The truth is I've had a really rough couple of weeks and writing a blog has been one of the last things on my mind.

It all started a little over a year ago, I was rushed into a hospital after a nasty bout of food poisoning. Well at least I thought it was food poisoning, it turns out I was suffering from ulcerative colitis (although they never knew it was exactly that until a few months ago, they could never figure out if it was ulcerative colitis or crohn's disease).  Severely, and I had never known.  The symptoms had been there for a while but really mildly, so much so my doctor had never pieced it together.  Unfortunately by the time they had figured out if wasn't food poisoning (or just a tummy bug as some of the nurses believed) it was too late, my bowls had perforated and I was rushed into the operating room, where they had perforated a few more times on the operating table itself.  There was no way they could repair them in time, and that resulted in me receiving my very own colostomy bag.  Unfortunately my body hasn't taken to that as well as it should have, this means I do tend to get a lot of bugs, a lot of tired days and a lot of days when I just don't want to go out.

Why am I telling you this?  Well, I'm just hoping that you understand that some days I'm not the hyper, bouncy ball of giggles and smiles that I seem to be, and on those days it's really hard to blog.  Lately I've been under a lot of stress, and it had got to me really badly.  Sad face.  No worries though because uber happy Cherry Neko is back.  The horrible stuff I've been stressing about has been dealt with and is over for now, so I don't need to worry about them any more.

I know, that maybe you didn't really want to know, or need to know about this but it felt nice for me to get it off my chest.

I promise my posts will not all be as glum as this one, I am after all not a generally glum person.

Thanks for reading, treat yourself to some sweets!

Sorry I never actually blogged last week after I promised I would, but unfortunately a few personal matters caught up to me and has left my mind all frazzled and mush.  Hopefully after Tuesday I should be back to my old strange and odd ways, instead of sitting at the laptop and staring right through it.
I apologize but my writing skills are being slowly diminished the more and more I'm stressing out at the minute,  but don't worry I haven't completely abandoned you folks.  That's just insane.  Yes, I may be a little bonkers (all the best people are), but outright straight-jacket insane I am not...though apparently there's still time.  Who knows I might rock the straight-jacket look.  Someday, but not right now.
So here I am, writing, as Danny quotes Anchorman at me like some crazed fan.  Oh, now he's singing the Zelda theme.  He's just as strange and geeky as me, yay!
So last week, in between the bad bits there was a few good bits.  Danny decided to take me out for the day to get my mind of things, and I ended up having a brilliant day.  We went to see X-Men First Class, which I absolutely loved.  I love X-Men, and it was nice to see an adaptation that still had its roots from the comic.  That aside, the film was amazing.  Brilliant story and brilliant actors, although I have to say that Michael Fassbender stole the whole show for me.  He was amazing as Magneto and I really couldn't imagine anyone else in that role any more.

Then afterwards I went and got a new piercing.  Which lands me at 13, it would have been 15 but unfortunately when I was in hospital a while ago I had to take them out for surgery.  I had my navel pierced from when I was about 14, but my whole stomach had to be cut open from the middle and unfortunately my belly button is just part of a huge scar now sadly.  I also had my nose pierced, and I had it done not long before getting rushed in.  they made me take it out so they could shove their pipes down my nose. By the time I could have them removed my nose had healed up.  I miss my piercings.  For some reason they felt like they had become apart of me, and now they've been taken away, which requires a sad face from me.

Any way my new piercing is in my left ear, in a place called the snug.  I love it, but I got no photo's of it at the moment because it's all swollen and bruised while it's healing, as soon as it's better though I'll put up a photo.

It was a good day and it really cheered me up.  So thank you Danny.

There was another day out, and I really do actually plan on blogging about it tomorrow.  I promise.  So in the meantime just think about Unicorns, cookies and polka dot skirts.  It will all make sense soon.

I've had such a good week.  It's certainly made up for last weeks lack of fun.  However, today I'm here to spread the word of Hell Razor.  I'll blog tomorrow about other things that have happened this week but for now I give you HELL RAZOR.
I've followed Jen's bloggy goodness for a while now, before I joined the world of blogs.  Her's is just so much fun to read and I suggest everyone out there who isn't busy making snow angels goes and checks it out.  Don't worry, I'll wait here for you to have a nose through it first,
...
you done?  See?  Brilliant isn't it.
Anyway I read a while ago, that she was offering out some stickers with her little logo on and I couldn't help but to ask for one.  To my sheer joy she said yes and so I began the waiting game and I waited patiently.  The when I popped home briefly on Wednesday I was really happy to have a nice little envelope waiting for me.  I knew what it was because it had Hell Razor stamped all pretty in the corner.  I couldn't wait to open.  So I didn't wait.  I was soooo excited.  I love getting mail.  There's just something exciting about getting something to open that isn't telling you that your bills are ridiculously expensive or that the newest Gym around the corner thinks that you are overweight and that you should go to their gym for the small price of an arm and a leg.  So with a huge grin on my face I opened the envelope, and was surprised to not only get one sticker, but three.  It doesn't stop there though, I also go a cute little badge, two of the cutest small business cards and a thank you card.  Thank me?  I should be thanking her.  So this is my way of spreading the Hell Razor word. 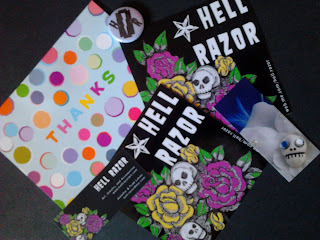 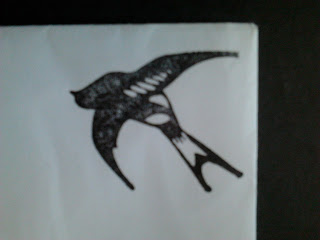 How cool is that swallow?  It was on the envelope.  I'm in love.  It will reside on my wall of random awesome pictures.
She also has her own little Etsy shop.  It's filled with pretty delights, which you should definitely go and have a look at.
These are my three favourite pieces, and I'm hoping to get some moneys so I can buy at least one of them and wear it pride. That little leopard print bow is super kawaii and I want it!
Yes all my favourite pieces have little skulls on, but that's just because I love skulls, but there's plenty of other little pretty bits to spend your pennies on.
So far, I've got one sticker on Sasquatch my sewing machine, and it suits her a lot.  Another one of my stickers has been swiped from me by Danny.  He stuck it on the front of his sketch pad and it looks really cool.   A business card has also been swiped by a friend, and the badge is worn proudly on my bag. 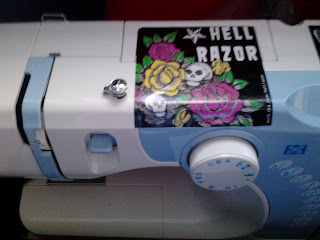 The photo didn't look so blurry when I took it, damn those photo pixies for wrecking it.
So please go and check her shop and blog out.
Thanks Jen, for making the world a little more pretty.