There's blood in the tub...oh wait it's just hair dye.

Yep.  I have once again dyed my hair.  I've gone from purple and blue back to red.  Gotta say missed it too.  I know I kind of cheat on this one because my natural colour is ginger, so going red is just like a blonde person dying their hair even blonder.  Oh well, I love it.  I've missed having bright red hair.  Although saying that I'm already looking forward to going back to dark green.  It's not like I can't, I can always return but for now I am once again a full fledged red head. 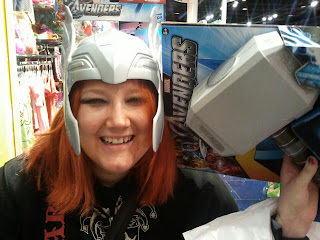 The ginger Thor obviously laughed so much her eyes squinted during photo opportunities.

I really haven't been up to much since my last post.  I went to the pub with my 2 best friends and Danny the other night.  It was so much fun.  It's a pub we often end up at, usually filled with students and old people a like and a lot of rock music.  Danny took control of the jukebox towards the end of the night so we had some brilliant tunes blasting out, but the best was when I heard Ozzy's voice blasting through the speakers.  I'd been singing War Pigs all week since finally purchasing Gears of War 3 and my wonderful boyfriend had obviously noticed and popped it on for me.  I even had a sneaky drink, even though I'm not meant too, but hey I've been sick for a very long time you got to be naughty every now and then right.  Plus strawberry cider is soooooo nice.

I also went for a day out in Manchester with Danny.  We spent the whole day shopping, it was such a good day.  I brought some clothes and the tastiest cookie ever!  I was really shocked to see a Taco Bell, I've never seen one in England.  I didn't have anything from it, but just seeing it was enough to make me smile.  Then I got home, after finally being allowed out for more than half an hour before feeling sick, I was expecting consequences.  I knew that's I'd be really tired and start to feel sick again but I couldn't understand why my right ankle was hurting so bad.  Then we discovered I had somehow at some point sprained it without knowing. I really do know how to do things awkwardly.  At least I got my day out and at least I got to sing War Pigs really loudly before my banishment to my bedroom once again.

So I'm once again stuck into a big pile of books, which I'm kind of happy about.  I can finally do some catching up on my reads.

Wishing you all a happy awesome day, and I demand that you go and put on one of your favourite songs on and blast it!