Cabin in the Woods

I won 2 free tickets to an early screening of Cabin in the Woods on April 2nd.

I'm so excited to see this film since it first got mentioned.

Haven't seen a decent horror for a while, so hopefully this will make up for the dreadful of Paranormal Activity 3.  I swear it was just Demon Eye for the Straight Guy.  If he doesn't like a lamp he'll just blow it up, if he doesn't like the table he'll just stick it to the ceiling.  The worse thing is I now have to watch the fourth one just to see what the hell is actually going on.  The first film was brilliant, and I even liked the second one.  Number 3 you have let me down.

Any way Cabin in the Woods = Hopefully good (I'm relying on you Whedon). 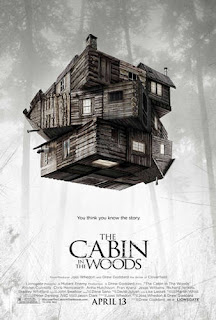 I want this poster for my room.

Also if you're a fan of Repo! The Genetic Opera, well the guys behind this magical piece of musical genius have a new film coming out, The Devil's Carnival.  I tend to hate musicals.  Only three have ever made it into my best films of all time category: The Rocky Horror Picture Show, Sweeney Todd and Repo! The Genetic Opera.  So The Devil's Carnival will have to work hard to get my approval.  However in the talented hands of Terrence Zdunich and Darren Lynn Bousman I'm sure I'm going to fall in love again.  Here's the trailer for those interested.